Please redeem
these Big Deals certificates by calling 320-634-0400 or in person at the box
office prior to the concert you attend.
The address is 18 E Minnesota Avenue in Glenwood.

Central Square was built in 1916 as the high school for
Glenwood. It is a key part of Pope County history. Its auditorium was dedicated
on May 28, 1937, as an addition to Glenwood Central High School (now relocated
as Minnewaska Area High School). The building with the historic auditorium and
gymnasium were preserved and rededicated as Central Square on June 10, 1995.

Preserving our slice of “Small
Town USA” has been a prolonged, arduous, rewarding, and very worthwhile
journey. Glenwood, on the shores of Lake Minnewaska, is located a short 1-hour
drive to the northwest of St. Cloud. Central High School, a WPA era (1937)
building, in Glenwood MN was closed in September of 1991 and the wrecking ball
loomed in its future. As with most of the rural areas of MN a consolidation of
districts was deemed necessary in order to facilitate the changing educational
needs of our children. Many of the older schools in MN were closed in the last
2 decades of the last century. With their closings, the character of much of
small-town life changed. As many of the folks who have toured our Central
Square have pointed out, the friendly face of the majestic older structures are
disappearing from all too many towns as centralized rural mega school complexes
replace them. Visitors commonly say they feel they have stepped back into their
past which evokes fond memories of a by-gone era.

Central Square has been blessed with the contributions of
many supporters that have brought this ever-evolving project to the point it is
at today. Central Square is a 501c(3) non-profit organization. These years have
been exiting years for Central Square, as we have seen all of the local and
area support being sustained. We have saved the building from the wrecking ball
and are making it something we can all be proud of. It is an attraction to the
entire area as an Arts Center.

A sense of the awe for all of the efforts of a cadre of
diverse people to tackle all of the facets of the preservation of this facility
permeates the air when one enters the auditorium. The auditorium was the
central focus of the preservation project. With seating for 1044 in the main
seating area, it is one of the largest West Central Minnesota auditoriums
between Minneapolis and Fargo. The architectural design of the building by N.
W. Fisher of St. Cloud, incorporated vision and expertise with acoustical
perfection. When seated anywhere in the entire auditorium one can experience
the pure tonal quality of the stage performances.

The range of the variety of
performers has been exciting over the past decade. Symphony orchestras,
instrumental soloists and groups, pianists, singer- songwriters portraying many
eras of American music, chorales, ethnic dance performances as well as
multi-community groups coming together to perform have graced the stage. Some
of the big names have included: Bobby Mcferrin, Lori Line, Gene Pitney, Mary
Beth Carlson, Gary Puckett, Bobby Vee, The Platters, The Coasters, The Kingston
Trio, Clay Crosse, Minneapolis Community College Gospel Choir, Rochester
Symphony Orchestra, the Heartland Bluegrass Opry, and a host of other wonderful
entertainers.

In 2003 the Central Square Board of Directors brought an
annual concert series to Glenwood. In the first season, 4 concerts were offered
and in the 2nd series this was expanded to 5 concerts, with more plans for
future concert series to expand even further. Central Square is very proud to
bring renowned performances to this wonderful venue, for the enjoyment of West
Central Minnesota residents. An annual professional children’s theatre
production is offered to schoolchildren, who travel as far as 80 miles, one
way, for what is perhaps their only exposure to a professionally produced
theatre experience.

In addition to the Historic
Auditorium, our complex includes an in-house kitchen for catering events,
rental space to various organizations and businesses, as well as a condominium
wing housing private owners. The Second Floor Gallery hosts a wide variety of
arts and cultural exhibits, many of museum quality.

All of this would be impossible
without the continued volunteer workers and financial supporters we are so
profoundly thankful for!

Redeem certificate by calling 320-634-0400 or in person at Box Office 18 E Minnesota Avenue in Glenwood prior to concert. No cash back or carry over. 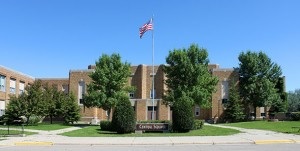 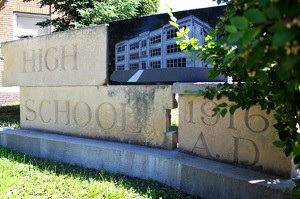 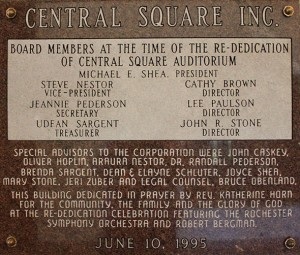 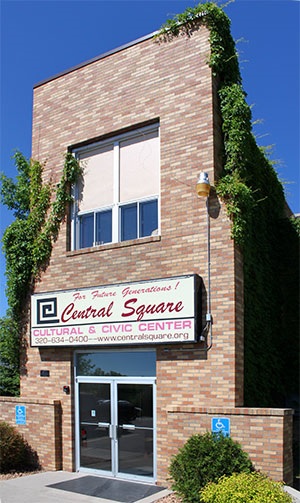 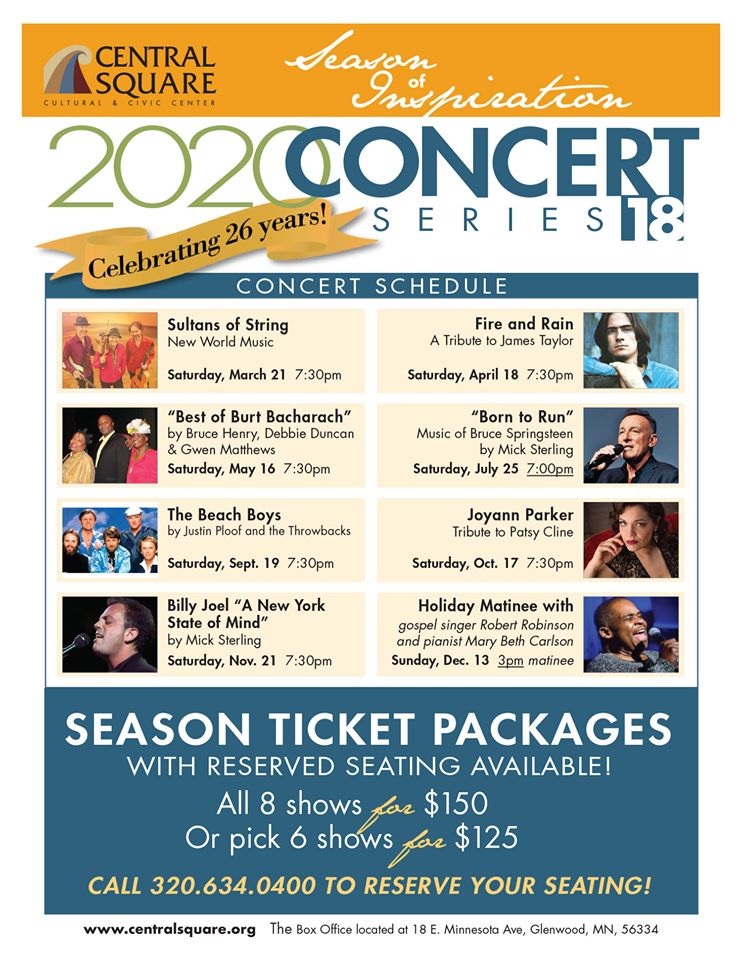